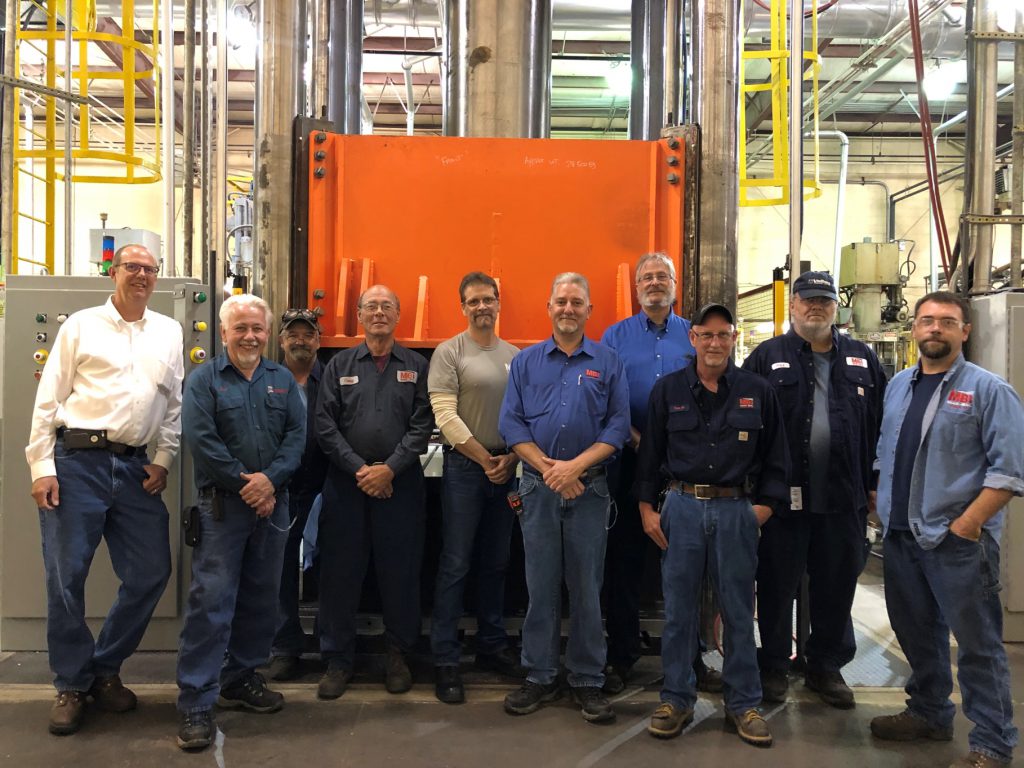 Staff at Mar-Bal’s Virginia plant with the new 1,000 ton press.

The Ohio-based thermosets firm has grown through acquisitions and product development and is looking at new potential in new markets.

In the last year, Mar-Bal’s AltraSet materials unit has developed three new materials that have expanded the company’s reach, President and CEO Scott Balogh said in a recent interview.

One of the new materials is a sheet molding compound (SMC) that offers high strength and elongation in structural parts, industrial batteries, sports equipment, auto parts, military devices and other uses.

Mar-Bal’s technical team worked for three years on the high-resistant material, finally creating a formula that uses innovative materials while providing “amazing thermal performance,” officials said. The material can be used for both injection molding and compression molding of complex parts for high-temperature environments.

Last year, Mar-Bal increased production capacity at its plant in Dublin, Va., by installing two new injection presses: a 500-ton and a 1,000-ton model. The firm also added a warehouse in California and expanded its warehouse in Dublin in 2019.

Balogh said that the integration of AlertTile and Detectable Warning Systems – two businesses that Mar-Bal acquired late in 2018 – is going well. Products made by those businesses also are being made at the Dublin plant.

AlertTile and DWS made surfaces, like the raised bumps on the sidewalk before an intersection, that alert people with visual impairments that they’re about to walk into a potentially hazardous area, such as traffic or a grade change. Mar-Bal previously had worked with both businesses before acquiring them. The acquisitions expanded Mar-Bal beyond its core electrical, appliance, and industrial markets and into the construction and safety markets.

Mar-Bal’s detectable warning surface line includes a variety of products, both flexible and rigid. They can be cast in wet concrete or surface-applied. Officials previously said that Mar-Bal is looking to grow its portfolio in the space so it can offer and even broader range of products to its customers.

Balogh said that production is running well at Mar-Bal’s plant in Painesville, Ohio, which opened in mid-2018. That site is the home of Mar-Bal’s compounding unit, which operates as AltraSet.

Mar-Bal makes compounds on five mixing lines in Painesville while also making finished parts on 23 injection presses. The 110,700-square-foot Painesville building was occupied by injection molder Core Systems until that business closed in 2013. Mar-Bal has hired many former core employees.

The move to Painesville represented an investment of about $15 million for Mar-Bal. That project was part of an overall strategy change in which Mar-Bal will sell more of its composites to outside firms, in addition to internal use.

Mar-Bal is a family business. Scott Balogh’s brother Steven serves as the firm’s executive vice president. Their father, Jim Balogh, founded Mar-Bal in 1970 in Cleveland after emigrating from Hungary.

In addition to Ohio and Virginia, Mar-Bal has manufacturing operations in Cuba, Mo., and Taizhou, China. The firm also has an Asia sales office in Shanghai. Mar-Bal employs 500 worldwide and posted sales of around $73 million in 2019.