Mar-Bal colleagues from all functional departments and plant leaders from the N.A. manufacturing facilities gathered at Punderson Lodge and Manor in Newbury, Ohio this week for the normally scheduled quarterly business review meeting (QBR). The QBR had the normal updates and forward vision from the departments of Finance, Operations, Human Resources, Engineering, Sales and Marketing which provided everyone with a great forum for communications and action plans for 2016.

What made this QBR different was the motivational and inspirational words supplied by Marine Corps Lt. 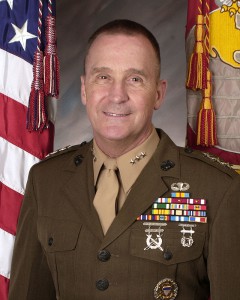 With over 37 years of military command leadership, General Sattler now helps various organization’s realize their greater potential by providing advice and counsel to executive teams through training and mentoring. In addition, General Sattler currently serves as the Distinguished Chair of Leadership at Stockdale Center for Ethical Leadership at the U.S. Naval Academy and serves on the board of the Semper Fi Fund.

Scott Balogh, President and CEO of Mar-Bal, introduced General Sattler to the audience as “a true American hero that has not stopped serving.”  From the battlefield to the boardroom, we are very honored that General Sattler now serves on the Board of Advisers for Mar-Bal, Inc. During the QBR this week, General Sattler provided the Mar-Bal colleagues with the 13 High Trust Behaviors that help to make better leaders. “As leaders in an organization, it is more than just a title, it is an obligation to the people you lead that you are engaged with them at all time and that as a leader you learn to listen and be open to change to get better,” stated Sattler.  “If not me, then who? If not now, then when? ….take responsibility as a leader!,” further stated Sattler.

Mike Ferraiolo, Key Account Manager for Mar-Bal stated after the session, “My key takeaways were (1) the overall energy of the General and the audience was amazing; (2) how collaboration and teams are the keys to success; (3) to get better every day.” In addition, Maria Gaeta, the Director of Human Resources for Mar-Bal outlined, “Trust is EVERYTHING!, high trust is the foundation for effective team dynamics! Trust =Character + Competence.”

General Sattler remained with the Mar-Bal team throughout the day including facilitating a breakout session where the Mar-Bal colleagues worked on the traits of trust and how to implement within all areas of the organization. “Today’s events and the inspirational and motivational drive of General Sattler exemplifies the continued investment in people by Scott and Steven [Balogh],” stated Ron Poff, Director of Global Marketing for Mar-Bal. “It was truly an honor to be with the General today and I look forward to learning from him and the rest of the Mar-Bal leaders in the future – what an AMAZING DAY and FUTURE!”